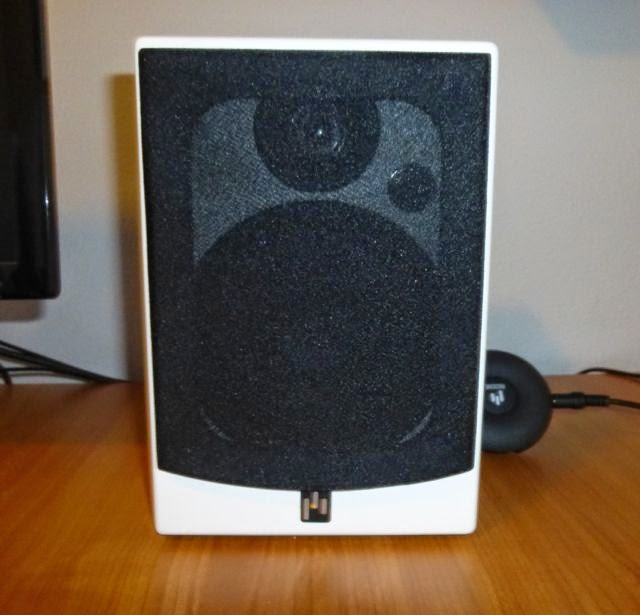 Wireless speakers. For the non-audiophile or significant other of the hobbyist it's the holy grail of visual appeal. The thought of speakers without wires brings chills to their spine.  The truth is a bit different as true wireless really doesn't exist as powered speakers still need electricity. The closest some would argue to wire-free is in-wall speakers, but they suffer from placement limitations. Until energy is broadcast radio-style as Tesla envisioned we are left with some wire usage in the setup.

The traditional speaker components consist of a one-inch tweeter dome and four-inch driver. A horizontal slit across the bottom of the backside acts as a port. Therefore, be aware of the sonic change that takes place if put against a back wall. I found that even four inches of spaces makes for some significant differences in lower frequencies.

The Allaire can accept audio signals in four different ways: optical from my Macintosh laptop, Analog from an iPod or other headphone jacks (RCA also), Bluetooth from a smart phone, and finally from the Aperion ZONA Home Audio Link2 (HAL) system ($149 for the transmitter/receiver pair). Those with the original HAL1 are in luck as it works as well.

Typical of Aperion Audio, the packing is first rate, though the blue, Crown Royale velvet speaker bags have been changed out to ivory. A two-way power cord, single stereo 14 gauge (yes, you read that correctly) speaker wire with banana plug ends, a one meter 3.5mm stereo cable, a one meter 3.5mm to RCA stereo cable, and a meter of Optical cable.  As with all Aperion products shipping is free (even on returns). Warranty is five years on the speakers and one year on the electronics.

A special mention regarding the Allaire remote. Usually at this price range the remote is about as generic and basic as possible. The Allaire remote is a small beast cut from a single slice of aluminum. It's heft is second only to the remote that operates my reference, twenty times as expensive SimAudio integrated amplifier. it's shape and layout allows for easy thumb control.

Over the course of the review I listened to the Allaire speakers in three different set ups: nearfield desktop, bookshelf, and on stands. With the near field placement the Allaire's performed best some 30 inches apart with a 15' degree toe-in.  Typical of close-in experience the Allaire's feel enveloping, with a matching sense of intimacy. On the 36inch wide bookcase the speakers were just 26 inches apart. The Allaire's do a very nice job of taking advantage of the bookcase frame, adding a robustness to the music. Finally, on stands in the same 9x12 foot room, a 54 inch spread and just 18 inches out from the back wall provided the best imaging of the three placements, though the bass was sacrificed.

Working with the Zona units is a breeze, the key being to let go of the "know it all" mindset and follow the directions.  Each unit is a little smaller than a hockey puck, with a round cap at the top doubling as a link (synching) button. A multi-colored LED assists in letting you know the link status.  A neat bit of design is how the USB cable wraps around and in the groove (think Oreo cookie). The wire could be a couple of inches longer so the unit could lay flat on the surface next to the speaker instead of hanging.

The same music was played in all three set ups. The overall impressions were the same. The classic jazz of John Coltrane's Black Pearls allowed the Allaire's to show off the excellent, horns. Flat-out natural without any sense of exaggerated frequencies.  Though the piano seemed stuck in a bland background. 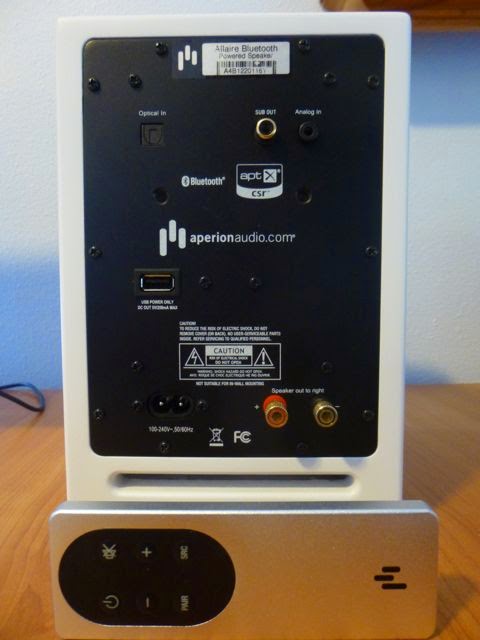 Moving from rhythmic jazz to the intensity of Led Zeppelin's "Since I've Been Loving You", the Allaire's nailed Robert Plant's vocals in all his almost-screeching glory. True to Aperion Audio's sonic signature, the snare drum is tight with a subtle roll-off. The electronic keyboard is forward and strong.  For such a diminutive cabinet, the Allaire's gave each member solid placement and space.  Hooking up Aperion's Bravus II subwoofer may just get you to take a break and play some air guitar, I know I did.

Full on orchestral music I expected the Allaire's to lump the mass of instrumentation into a indiscriminate sonic stew. However, the HD Track of the Mozart Violin Concerto in G by Marianne Thorsen was a revelation, the treble opened up wider than a standard 16/44 track. There was no crunch at the top in an attempt by the Allaire's to do more than possible. These small, powered dynamo's take advantage of higher quality source material ladder.

Trying out Thorsen's work with the built-in aptX capability the sound when using Bluetooth is a worthwhile experience. It's still has room to improve, however, comparisons to fingernails dragged across the chalkboard are no longer warranted. Range, of course is still limited compared to Aperion's Zona HAL2 system, but in the same or adjoining room, no problem.

K.D. Lang's "Season of Hollow Soul" from her Ingenue album recreates her unique, full vocals front and center with an easy, smooth pitch. Once again Sharp percussion, in this case cymbals, are missing sparkle. But much preferred over the sharp treble that many times is boosted, creating listener fatigue. The bass guitar at the very end of the song is nicely recreated.

Final Thoughts
At $400 a pair, the Aperion Audio Allaire powered speakers may not seem like a bargain, but when looked upon as a quadruple connection option they are a bargain.  The ability to switch between optical, analog, Bluetooth, or Aperion's own Zona wireless system gives the Allaire's a Swiss Army knife kind of appeal.  Add in an alluring, non-fatiguing sound and what Aperion Audio has is an absolute winner.


My first experience with attempting to fill a large space with sound from home speakers, was my neighbor’s rec room built in the mid-seventies.  The room wasapproximately 30 x 30 with 18ft ceiling. The first time I entered the space Elton John’s anthem “Funeral For A Friend/Love Lies Bleeding” was on the turntable. But no matter how far we pushed the volume, the room swallowed the sound. If only the Klipsch Forte III’s had been in that space the results would have been so very different.

Reliving this 40+ year-old moment, the bass guitar dominates during the transition from down to up-tempo. The Forte III’s energize Elton’s pounding of the ivory. Listening to “Bennie and the Jets” is pretty darn epic as the concert hall sound is easily recreated. Pick any track from Goodbye Yellow Brick Road and the Forte III’s will easily rock the space. The Forte has been a part of the Klipsch stable since the mid 1980’s, with the basic design never wavering. The cabinet is a br…


Recently, I’ve been searching for a DAC that would go effortlessly with my vintage Adcom system. I desired something simple, and if possible, with a very small footprint. I had tried various USB stick DAC’s.While they were nice and the perfect size, I always felt they were a bit compromised sound-wise. When the opportunity came to review the Chord Mojo I knew I had to take advantage of the opportunity. I will admit that in my mind I wrongfully expected the Mojo to be largerin my mind than it actually is in reality.  I had I assumed a case some 6” square. In truth, the Mojo is similar to a deck of playing cards, measuring 3.25” x 2.5” x 1”. Upon unboxing, I immediately noticed the heft of the aircraft grade aluminum case and impressive finish quality. The three translucent balls grooved-in along one side garner immediate attention. The trio has multiple functions; the left is for power (holding a couple of seconds to start) as well as the color-coded sampling rate.…

The Pathos Classic One mk. III was one of those pieces that I always thought it would be amazing to have.  I first heard Pathos audio at a friend’s house and it was honestly the first time I thought I could live without separates!  The Pathos piece I heard was the Logos, it sounded amazing but I’m not crazy about that whole giant stereo amp thing. It is a very cool looking piece, as almost all of the Pathos gear is.  About a year after that encounter I was at Katli Audio in Chino Hills to hear some speakers and he had the Classic One mk. III. Now that thing was right up my alley, mono-block sized stereo output, steel and wood construction and FAT SOUND.  The price unfortunately was not up my alley and so began to lust after this Italian Beauty!

At that point in my life I had my daily Audiogon searches to spy on my favorite pieces that were out of my financial reach.  I came across an auction that was still sub-1000 and something in me just had to “Throw my hat in the ri…