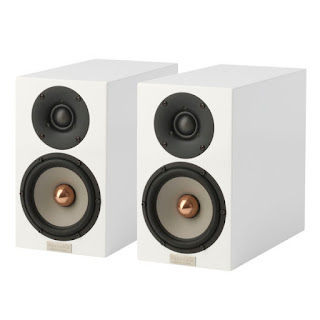 Playing big" is heard a lot in audio reviews. Sometimes it fits the bill perfectly as with the classic Adcom 535 amplifier, or the Audioengine A2+ reviewed here previously. For the past several months I've been enamored with a small set of Finnish monitors, the Penaudio Cenyas. Though only 13"h x 6.5"w x 11"d, the compact Cenyas fill a small room. In medium spaces they easily fool the listener into looking for bigger speakers. In previous years at RMAF they were mentioned several times as a room favorite, and for good reason.

I picked up the Cenyas a few months after first laying claim to my present, small 9' x 12' listening space. I was looking for a small monitor that would fit the scale of the room, and could be easily moved when guests came to visit. Using the Cardas website tool for speaker placement I set the Cenyas up on my trusted sand-filled Celestial si 24" stands (the same ones that the venerable John Atkinson uses) and went about listening, adjusting,etc., etc.. In the end, I ended up with the speakers just 3 inches farther apart than the website.

Even after not hearing the Cenyas for nearly two years my memory was quickly jogged by the well-defined and solid bass. I'm not talking the single note thump of many rear-ported small monitors, but truly consistent and musical bass frequencies. The 5.75 Seas Excel driver with copper rings/cap takes care of all the mechanically-produced frequencies below 4000z crossover, leaving the 1.25" Wavecor fabric dome tweeter in charge of the remaining upper frequencies. The high crossover point may puzzle many when it comes to a two-way design, but the results speak for itself; an incredibly smooth sound, yet detailed with zero edge.

Doubt the bass abilities of the Cenyas? Just play Dan Fogelberg's "River of Souls" and be ready. It's encompassing but never bloated. Even better is that the latin-style acoustic guitar work doesn't get lost in the wash of bass frequencies. Just as noticeable is that vocals stay front and center, avoiding potential congestion. The bass tour-de force continued with "Fancy Funeral", Lucinda Williams haunting reflection on saying a final goodbye.

At 86 db and 4 Ohm nominal the Cenyas won't win any awards for efficiency, but they are not a power hog. My 35wpc Vista Audio i34 integrated tube got them moving, though they did ultimately love the juice that the 150 wpc of Simaudio i7 provided. Also, 100wpc of a friend's DIY class D amp ran the Cenyas just fine as well. What does that translate to? With solid-state or chip amps you'll want at least 50wpc of quality power, while 30wpc of tube should make you quite happy in a small space.

One of the enjoyable things about the Cenyas is how much fun they make listening to non-standard music by artists. Take J.J. Cale's jazzy, funk "Hold On", the toe-tapping intimate nature places the listener front and center for what feels like an impromptu song for friends.

The breathy, fast-paced female vocals of Judith Owens "Nicholas Drake" sound fuzzy on many speakers, but not the Cenyas. They produce the depth of clarity that exists just below the surface. Much like higher quality DAC's, the Cenyas find and reproduce the next level of detail.

Unlike most every North American speaker design, Penaudio uses birch plywood rather than MDF for the enclosure. While the review pair is a stunning white piano lacquer, the light stained birch is a stunning finish in its own right. Other finishes include Black Ash, Oak, black lacquer, and Zebrano.  A single pair of of excellent WBT binding posts and an aluminum port make up the back face.

The Cenyas don't avoid the rough edge by rounding off the top end, its the quality of the design that allows them to find the maximum music possible. Listening to the Miles Davis classic "So What", the cd version of the Columbia recording does present some crusty edges at times. But the magic of the saxophone comes out in full force.

Shifting to hard rock, for small spaces the Cenya will do just fine. Nirvana's Nevermind album, taking on the challenge of playing balls to the walls. Now, I'm not going to tell you it can duplicate the sheer intensity of a big pair of floor standers, but you will be pleasantly surprised by what they do bring with the opening track "Smells Like Teen Spirit". The one song where they did show the limits of a small monitor is with "Breed". But to be fair, the track has always in my opinion suffered from congestion.

Moving to the original long hair music, the soundtrack to Lawrence of Arabia is a tremendous challenge to small speakers as the music was created to play as big as the vistas of the Sahara itself. The grand theme of "First Entrance" with the strong buildup of horns and strings the Cenyas handle with the inherit quick switches from quiet to intense thumping of the kettle drums. The french horn, an instrument that tests the boundaries of musicality is wonderfully entrancing on the Cenyas.

Final Call
At $4500 a pair, the Cenyas are an investment, no question about it. But a very good one for those that want to make the jump from hearing music to actually craving hearing what artists have actually created. Just get them away from the walls, put them on quality stands, and give them quality power. And don't worry about a subwoofer (unless you're a fanatic about bass), the Cenyas bring along plenty of their own.