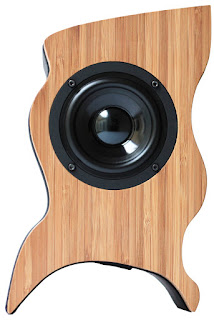 
Breaking the mold. Thinking outside the box. Artistic license. Those phrases mean only one thing, a new look at a standard design. Nowhere is that more true than with the Talisman powered bookcase/desktop speakers. The diminutive, yet focus grabbing design defy quick explanation. My wife, after struggling to find the proper description sent a photo of them out to friends and family for help. For myself, after a couple of months the best I've come up with is the curvy body of the 1970's bombshell Charo combined with Sponge Bob legs. That being said, the only thing that equals the surprising Talisman looks is the sound.


Serene has taken a page from Apple with the packaging box. The speakers are held in protective position by a bamboo frame cut to the speakers curves. The Samsonite gorilla from the 1970's commercial would have to work really hard to damage the speakers.
Don't let the exterior curves fool you into thinking the Talisman is all about the eye candy. Far from it, there is a great deal of solid acoustic knowledge within the design. The cabinet is a mix of 3/4 inch Bamboo and MDF-covered leather. Serene Audio could have just screwed in the driver and called it a day. Instead, the interior of the cabinet is filled with sound dampening material to further reduce standing waves. A tuned rear port adds a hint of punch. 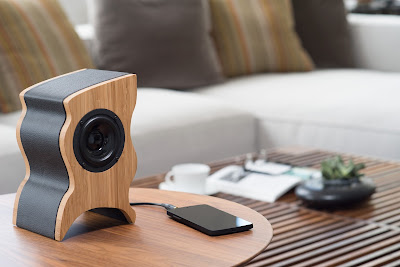 Inside one Talisman is a DSP class D amplifier. Impressively, the amplifier is not an off-the-shelf third party unit, but one designed by the Serene Audio team. Using cabinet and driver measurements the DSP amplifier was engineered to work together instead of fighting to control the sound. The three-inch long throw driver fills both a 9x12, and 13x18 room with surprising volume. The amplifier's control panel consists of a GROUND and RCA phono inputs along the top. The lower level has a combo push ON/OFF volume knob, subwoofer RCA, SVHS-style speaker cable jack, mini-stereo input/headphone output jacks, and a power cord socket for the brick. To assist in knowing whether the power is on or not are a pair of red/green LED's. 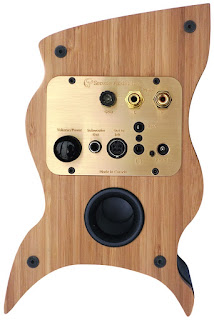 Placing the Talisman's 36 inches off the floor and 6 inches from the back wall without a subwoofer on an office bookcase generated the best results. Make sure that all the connections are fully plugged in as I noticed a false secure point that led to an inverted sound.

The funky guitar riff that carries Steely Dan's "Godwhacker" projected forward, even with the various layering of instruments that Becker and Fagan always provide. Once the Talisman dropped lower than 24 inches vertical projection lost impact. The same hold true in opposition above 72 inches as seated listeners missed out.

In my experience the typical single driver mini-powered speaker fails to deliver virtually any cymbal ring. The Talisman's avoid that pitfall nicely in Phil Collins "Tomorrow Never Knows". Now, while it won't match a Totem in upper frequencies, the fact that crashes and brushes on a cymbal are actually heard and not just eluded to deserves recognition. Plugging in my Rega RP1, the Talisman's phono preamp was a treat and definitely will appeal to the vinyl-hungry millennial crowd. Joe Jackson's "Heart of Ice" hi-hat opening is worthy of a listen, instead of skipping past. 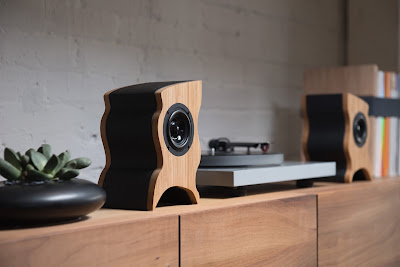 Adding a subwoofer kicked the enjoyment factor up a couple of notches. Whether it be a $25 Polk Audio subwoofer liberated from the local Goodwill, or the Totem Kin, replacing the limited bottom-end with actual deep bass took away any subconscious desire to quickly finish the review and hook back up the reference system. It deserves mentioning that the only bass adjustment used is a "dynamic range control" that acts a protection against the driver's over excursion. The musical question went from "what can't these wavy speakers do", to "what other music do they play well."

Maybe most surprising is how well the Talisman's handle symphonic music. In no way can they replace a set of Wilson Watt Puppies, but if you enjoy classical recordings while working in your office or reading a novel they do allow for enjoyable background auditory stimulation. The three-inch driver couldn't recreate the vast Dakota prairie in John Berry's  'Pawnee Attack" from Dances With Wolves" soundtrack, but the dynamic french horns and strings played with nice clarity. The background percussion hits came on with a kick.

With a driver and cabinet this small there are a few compromises. Most vocals did come with a bit of nasal pitch. The soft baritone of crooner Don Williams exhibited this quality, though by no means did it distract to the point of focusing on the limitation instead of the positive qualities. Nora Jones' laid back voice came off a bit reedy. But once again in no way was it a deal breaker, just an honest consequence of design/materials.

The upbeat late 1980's early '90's jazz of Fourplay with Lee Ritenour made the Talisman's jump as well as pushing these curvy gems  to their limit. The punchy, forward music of "Bali Run" and "Quicksilver" surprisingly filled the 13x18ft carpeted and massive fabric couch family room with the subwoofer in support to upper 80's decibel point before distorting. 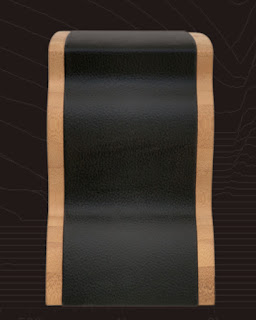 If I had one gripe it is that the connection cable between speakers is too short. I wanted to place the Talisman's on either side of my 42" mantle mounted plasma television. But the the cable length couldn't stretch far enough the get past the unit's bevel edge. Granted, most buyers are probably going to be placing them on a bookcase or credenza, but an extra 18 inches sure would have been nice.

Final Score
At $445 a pair, the Serene Audio Talisman speakers aren't the cheapest option in small, powered speakers, but they are the most visually intriguing. Want to make sure your guests have something to talk about? The Talisman's are a perfect conversation piece. Everyone who saw them had something to say. Plus plenty more once I started playing music. Between the physical curves, small driver, and no electronics in sight, the Talisman's pleasant sound rightly stole the spotlight. They truly are a lifestyle speaker. Don't be surprised if you see them on HGTV's Tiny House program in the future. The Talisman's are a hell of a lot of fun, and not just with the lights on!