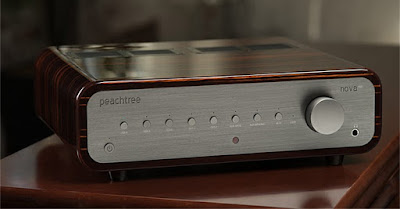 Typically, I firmly believe in the mantra "If it works great, don't screw with it". When I first heard that Peachtree Audio went all version 2.0 on the audio community I took pause. Their nova125 and 220SE integrated amplifiers impressed me to no end with a top notch pairing of build quality and musical performance. Other than at the end of the 220SE review that I wrote for TONEAudio wistfully asking for a phonostage , I thought Peachtree had created a holy grail. After spending some time with the nova150, returning founder David Solomon and team have developed an altogether terrific piece of gear.

The nova150 retains one of the sexiest curves in all of audio with the rounded sides encased in real wood ebony mocha veneer for the review piece or gloss black. The dark pewter faceplate exudes a sense of weight. The all-new design includes the change in source button lighting, from oval surrounding the button to a small blue LED just above. The LEDs serve a second purpose, slowly lighting up from left to right as the volume increases. The volume knob is much more deliberate with seemingly infinite increase/decrease control.

Having asked for a phono input, it’s best to start there. First off, to engage the phonostage preamp one needs to hold down the PHONO/AUX 2 button for a few seconds until LED turns green. Otherwise, as blue it stays as a regular RCA input. A pristine copy of Chuck Mangione’s Man of La Mancha soundtrack spun from a Rega RP1 with Ortofon Super OM40 made a quick impression. This phonostage was no afterthought. The roar of the lower brass instruments in the title anthem pumped out serious detail, well done!

Delving further into analog, plugging in a vintage Harman/Kardon CD 291 cassette deck and playing a recorded copy of Pink Floyd’s Animals, the nova150’s preamp section with its Input/Output loop is something special beyond its $1599 price point. Much like the phono section plenty of musicality and life sprung from the 30+ year old TDK SA tape. With a stunning signal to noise ratio of 111db at preamplifier level, the nova150 is passing an incredibly clean amount of 107db music leaving the amplifier. To improve the signal to noise a sacrifice had to be made, the way-cool built-in tube buffer with its display window on the front panel was retired. While it may seem sacrilegious for the fan base, from a clarity standpoint the 88 to 111db jump in signal to noise measurement from the 220SE model makes logical sense. One listen tells the story, the amazing colorful light of music against a black background. Of course, for those who crave filament warmth a tube buffer can be added via the LOOP.

Peachtree gear made itself famous by being at the forefront of the multiple digital input wave. The nova150 includes five digital sources: USB-A, USB-B, 2 Optical, and COAX. The five inputs are fed into a ESS Sabre32 DAC that can handle PCM (16-32bit, 44.1-384khz) and DSD (2.8224-5.6448mhz) files. For Apple iPad/iPhone owners with Lightning connector, the Peachtree team developed the Dynamic Noise Elimination Circuit “DyNEC”. Simply, it removes the noise caused by the power source of the iOS device. While Audio Pursuit doesn’t do measurements, I will say that both my personal lossless files, as well as Tidal sounded terrific playing a wide variety including George Winston’s Christmas classic December. The shrill-free clarity of Winston’s piano work is stunning. One added plus is that the remote controls the Play/Pause, and << >> track features of the iOS device.

Like the 125 and 220SE, the nova150 holds excellent grip on difficult to drive speakers like the Magnepan 1.6’s. Pushing the volume up to triple decibel levels playing Brahms, Beethoven, Mahler, and Tchaikovsky, the amplifier barely even registered any heating. More importantly, the music stayed clear, clean and the nova150 held complete control over the Magnepans. More realistic for apartment dwellers, a borrowed pair of vintage Celestion SL6s bookshelves with their inefficient 84db 4 Ohm load proved no problem for the 150 wpc nova150. Staying musical in those movements where high current is instantly drawn upon is a hallmark of Peachtree’s class D amplification. The open top end of my reference Paradigm Prestige 75F’s did have a bit more sparkle, but were never harsh or fatiguing. While speaker matching can typically be more difficult with chip amplification, no reservations can be made about the nova150.

For those times where intimate listening is required, the nova150 provides a standard headphone jack. Much like the phono stage it isn’t an afterthought but separate amplified section. Whether playing Billy Joel’s “Allentown” thru KEF M500’s, or The Who’s Quadrophenia with Sennheiser HD650’s, the nova150’s single piece solution will satisfy the loudest of listeners. No, it won’t match the Simaudio HAD 230 for sheer grunt or depth, but it’s balanced, solid, and pleasantly musical.

Don’t fret about the nova150 lacking WIFI, it isn’t an oversight. That module is in development and will be available for purchase by current owners. What its full capabilities will be is a closely held secret, but if the history of Peachtree’s commitment to digital audio is any indication, it won’t be limited, that’s for sure.

Final Score
Combining a high power amp, preamp, DAC, and phono in a footprint just over 14 inches wide by 13.25 deep is no small feat. Giving it the ability to be so musical is excellent engineering. Finally, having it built in North America for under $1600 is remarkable. The only thing missing is streaming software and or Roon integration. But at this price point the nova150 is chalk full of value. The nova150 checks off virtually every category one could want. Admittedly, I’m searching for the next generation of all-in-one integrateds to take me into downsizing phase of life. The Peachtree nova150 is a definite finalist! -Mark Marcantonio
Equipment:
Musical Fidelity A5 integrated amplifier, Simaudio HAD230 DAC, Simaudio LP5.3, Rega RP1 w/Ortofon Super OM40, Paradigm Prestige 75F, Magnepan 1.6, Cardas cables and interconnects, Shunyata Venom cords.

Copyright 2018, AudioPursuit. All Rights Reserved. No redistribution without permission.