My first experience with attempting to fill a large space with sound from home speakers, was my neighbor’s rec room built in the mid-seventies.  The room was approximately 30 x 30 with 18ft ceiling. The first time I entered the space Elton John’s anthem “Funeral For A Friend/Love Lies Bleeding” was on the turntable. But no matter how far we pushed the volume, the room swallowed the sound. If only the Klipsch Forte III’s had been in that space the results would have been so very different.

Reliving this 40+ year-old moment, the bass guitar dominates during the transition from down to up-tempo. The Forte III’s energize Elton’s pounding of the ivory. Listening to “Bennie and the Jets” is pretty darn epic as the concert hall sound is easily recreated. Pick any track from Goodbye Yellow Brick Road and the Forte III’s will easily rock the space.
The Forte has been a part of the Klipsch stable since the mid 1980’s, with the basic design never wavering. The cabinet is a brawny 16.5 inches wide to go with the 36-inch height. Depth is a modest 13 inches. The review pair came in a beautiful satin finish American walnut veneer. Other veneers include Natural Cherry, Black Ash, and Distressed Oak. Be warned, each cabinet tips the scales at a health 72 pounds.
The expansive width allows for both compression-style titanium 1” tweeter and 1.75” midrange horns inset into the cabinet above the 12” fiber woofer. A back panel mounted 15” passive woofer provides the thunder. Dual five-way binding posts complete the tour. Each speaker sits on a simple, rectangular frame base. 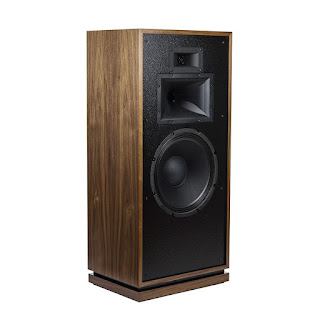 Due to the Forte III size, I chose to review them in my 15’x19’ living room. After more than a few hours of constant moving the Forte III’s found their sweet spot just 12” out from the rear wall and 7 feet apart. Every room and speaker is different so don’t be afraid to play around.
The Forte III’s are all about the big sound, delicacy is not a part of their DNA. It’s about re-creating a big room and these speakers from Arkansas do it well. Blood, Sweat, & Tears “Spinning Wheel” powers its way with sharp percussion. The sheer size of these speakers helps keep congestion to a minimum, as the ending stays clean thru the mash up flutes and other instruments. In a bit of a surprise, the various trumpet solos are quite smooth, not overly intense including when combining the Forte III’s horns and the Peachtree nova150’s class D amplification. Throughout the album, Blood, Sweat, & Tears brass never falls into shrill territory. The best example is “Lucretia MacEvil”. The distinct vocal style of David Clayton Thomas is presented in full detail.

Continuing the 1970’s musical tour, “School” from Supertramp delivers a nice full room kick once the band joins in. The Forte III’s thrive off the wide dynamic swings of the group. Quiet passages provide respectable detail and the ability to pump vast energy is a real treat. At 8 Ohm nominal and 99db efficiency, it doesn’t take much wattage to get the room pressurized. A vintage 25wpc Pioneer receiver had no problem forcing my ears into a distortion-free surrender. The idea that a $3600 pair of speakers can take a listener into ecstasy with such simple amplification is lights out cool.
Taking advantage of the wife being out of town, an autumn rainstorm in Portland meant putting on The Who’s Quadrophenia at decibel levels that could stir Keith Moon’s remains. John Entwhistle’s thundering bass left no doubt that the Forte III’s are truly a monster rock speaker.  Add in Pete Townshend’s lead guitar windmill strokes and Moon’s chaotic artillery drumming and it’s rock n’ roll at its finest. The Forte III’s paired in this case with a 35 wpc Vista Audio integrated tube amp provided all the juice one could ask from a speaker.
Having so much upper volume pleasure, it seemed only appropriate to relive the concert rock days. Like many, I spent a couple of Sunday’s during summers attending all-day stadium shows. Delving into memory lane with Kansas’ classic “Carry On Wayward Son”, the Forte III’s take great advantage of the massive passive radiator. Yet, the bass kicks blended rather than overwhelmed the balance of the piping synthesizer. The famous signature violin and acoustic guitars in “Dust in the Wind” create excellent stage depth without any harsh shriek. 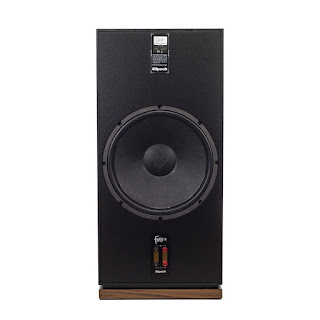 Providing the big hall sound does mean a tradeoff. Pinpoint imaging is sacrificed along with the single position ultimate sweet spot. Instead, several listeners get to enjoy the concert sound. So don’t worry about moving about the room or tilting your head. It’s all about enjoying music with others.
With the treble and midrange horns one would think that the accordion would be a no-go instrument. Listening to “Check It Out” by John Mellencamp dismisses that theory, as the hand organ places itself nicely within the large soundstage. The upper frequencies are sharp, but never irritating no matter which of the three amplification types powered the Forte III’s.
Paired with Nelson Pass designed vintage 60wpc Adcom GFA 535ii, the Forte III’s ooze punch and dynamic power. The famous Maxell tape magazine ad comes to mind with guy in the chair and his hair bowing backwards from the speaker’s output. The best musical match of this pairing was surprisingly the various Indigo Girls ballads, especially “watershed”. Both vocals and instrumentation was stunning, with tonality, instrument separation, and vocal harmonies made for a lean-in experience.
A few acoustic and small instrumental recordings did demonstrate the Forte III’s limitations. Sade’s vocals lack the warmth and come across with a bit of a honk, even with tube power. The delicate fingering of Sean Harkness acoustic guitar doesn’t have the inner detail of other speakers. The finite symphonic details of “Neptune” from Holst’s The Planets don’t match the Forte III’s wonderful recreation of the concert hall and the ability to hear quiet passages. It’s the consummation of everything, rather than the individual ingredients that make the Forte III’s so much damn fun.
Final Thoughts
The Klipsch Forte III’s are all about the big sound and enveloping the space and listener. If you’re into the absolute finite instrumental detail, the Forte III’s are not for you. The Klipsch experience is enveloping and reminds the listener of what live music is all about. The fact that very little power can make the Forte III’s fill even an immense space makes the speakers’ price tag far more reasonable. If you have a big room and a hankering for rock or larger ensembles, give the Forte III’s a ride, just bring along a BIC lighter to flick!