High power amplifier. Those are three words difficult-to-drive speaker owners want to hear. Especially when one is a reviewer. The desire to hear even more of what a pair of panel speakers can do gets the heart racing. When Jim Spainhour of Peachtree Audio contacted me with an offer to review their new top-line amp500, no way was I going to turn down the opportunity. In less than two weeks the piano black oval-cased beauty was at my front door.

The amp500 resides in the standard Peachtree cabinet from their successful integrated line of nova150, 300, 500. The front face is brushed aluminum with a single LED that rings the power button and glows red when off, and blue when powered on. The word “Peachtree” is nicely engraved dead-center. I was a bit disappointed to see a badge for the product name in the top right corner instead of carved word/numbers like the 300. But, that’s a cosmetic, not a performance issue, so call it a miniscule negative. While component parts come from many countries, all Peachtree amplifiers are assembled in Canada!

Power Time
Like all gear that comes thru my listening space, the amp500 spent a week running continuously to burn-in the electronics in a basement storage room. Once complete, the amplifier was placed into the main rig fed by a Parasound Halo P6 preamp, and pumping the 500wpc 8 Ohm (700 4 Ohm) to a pair difficult-to-drive, crossover-modified Magnepan 1.6qr’s. The amp500 power surge took the 1.6qr’s to a new level of performance. The combination is sheer Detroit muscle car with 2020 road grip and nimbleness. The bottom notes thrusted enough slam even at 75db level that complaints from upstairs across the house were intense, to say the least.

In the past year, I’ve found that Isaac Hayes’ brilliant soundtrack Shaft to be the perfect starting point for reviewing every piece of gear. The weight and punch of Hayes funk fusion across the entire audio spectrum is special. All the elements a reviewer speaks about: imaging, soundstage, dynamics, speed, punch, depth, resolution, etc., etc. are revealed with this recording. Whether it be the Magnepan 1.6qr’s, the .7’s, Totem Model 1’s, or the Paradigm Prestige F75’s, the amp500 had complete grip and brought out the full musical capabilities. Listening to the drum stick tapping in the opening of “Walk from Regio’s” was tonaly spot on. All the while, the flute had natural timbre, and congo’s a warm undertone at the end of the song.

While the piano is usually mentioned as the single-best instrument to test sonic quality, sometimes one needs a tie-breaker. For myself, the first choice is an electric organ set as a xylophone is the decider. “Ellie’s Love Theme” from Shaft recreates the upper keys without any hint of shrillness. Coronet’s had that sweet sharpness, but never into teeth-clenching shrill in “Shaft’s Cab Ride”. This is the difference that quality, specifically designed class D components provide over off-the-shelf chips. Think of it as garden fresh vs. canned.

With such a reservoir of power, the amp500 can bring out the punch in the mid to upper registers as well. The pluck of Al DiMeola’s acoustic guitar, and Keith Jarrett’s finger jousts on the keyboard push the piano out to the listener. It’s the beauty of high power, and there is no substitute short of a live concert. All this becomes more delicious when the amp500 is paired with Magnepan’s recent .7 speakers. The clarity level is a serious jump over the 1.6qr’s.  Add in the class A input stage and 127dB a-weighted signal to noise ratio of the amp500, the absolute gusto of this Peachtree/Magnepan pairing is a stunning match. The bass punch is such that for most music I felt no obligation to turn on the subwoofer even at just 75dB.

Admittedly, I’m a big fan of the vintage Adcom GFA-555ii amplifier with it’s beastly ability to power anything. But over a couple of weeks of comparing it’s 400wpc 4 Ohm solid state power to the amp500 two things became apparent. One, the noise floor of the Peachtree amp500 is remarkably black, no hiss whatsoever. It’s a couple of solid steps up. That allows for all sorts of obscure, even hidden details to be heard. Two, the power, oh the power of the amp500. From the percussive canon shots of the Telarc cd 1812 Overture, to the relaxed fun of Fourplay’s Elixir album, the clean power across the entire audio spectrum is a joy when paired with the .7’s.

Where does all this power make a difference for most owners? Not at high volume, but lower levels. With a typical powered amplifier, integrated, or receiver that means hearing music, but not experiencing it. The sounds are there, but dynamics are missing. That’s where the Peachtree amp500 earns its stripes. A quiet morning of the Piano Guys, becomes an at-home concert. Finger taps on the piano become strikes. The soundstage has depth, subtle details normally undetectable at low volume bloom from the power. 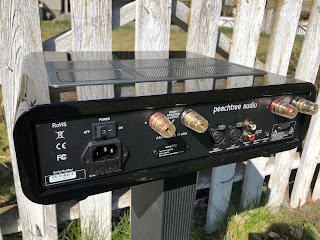 The beauty of composer Ferde Grofe’s Grand Canyon Suite and it’s iconic ode to the west “On The Trail” demonstrates the power and fluidity of the amp500. From the natural timbre of the oboe and basson, to the third movement of the distant horns carrying across the canyon rims oozes depth and honest warmth. Add in the delicate clopping of percussion, and one experiences the enormous soundstage that amp500 generates with its reservoir of clean, noise-free wattage.

Rotating in a pair of 92db efficient Paradigm Prestige 75f mini-towers, puts the amp500 into the Indy race car zone. With all the 500wpc horses under the hood every note has a full heaping of the energy necessary to be it’s natural best. Yet, even in my rather small space never did I feel there was too much torque. That says a great deal about the architectural design. It’s the big, powerful athlete with the quick feet.

Usually, I’m not a big fan of class D and Paradigm as the brightness of the tweeter can come off rather sharp and occasionally brittle. But in the last two years as I have reviewed true proprietary class D designs that issue has faded from being a constant to a rare occasional experience on a specific track. I used to never play Donald Fagan’s Kamiraid thru class D amps for relaxed (non-review) listening as it was too harsh especially on any Paradigms I had in the house. With the amp500, I felt no such fear. That says much about the design team Peachtree brought in for this unit.

Swapping in a pair of vintage Totem Model 1’s, the bass is obviously limited due to cabinet size, but the mids and highs take full advantage of the amp500’s current. One feels the energy behind every instrument. Dire Straits “Once Upon a Time in the West”, the drum roll mid song is a deep imaging treat. The amp500 coaxed every bit of bass available out of the 1’s. Listening to the track “News”, Mark Knopfler’s vocals are realistically detailed and his unique guitar style is crisp and full. As an end of song dessert, the amp500 delivers a delicious percussion solo, including a punch that is solid, but not messy.

Continuing the rock and roll tour, Bob Seger’s “Still the Same” vocals went right to the edge, but didn’t cross into harsh territory. The underappreciated “The Famous Final Scene”, Seger’s classic soulful ballad provides a tad of light richness. That’s the beauty of such a low noise floor, the recording space, the skill of the musicians and engineers are given room to shine.

Final Thoughts
Maybe I should have known how impressive the Peachtree amp500 would perform in my system with multiple speakers. But, I wasn’t prepared. The British have a great word that is absolutely fitting, “gobsmacked”.  No matter what music or speakers I threw at the amp500, this sexy oval dynamo delivers beyond all expectations. Yes, I’m finding a way to keep the Peachtree amp500, it’s an absolute steal!
Mark Marcantonio