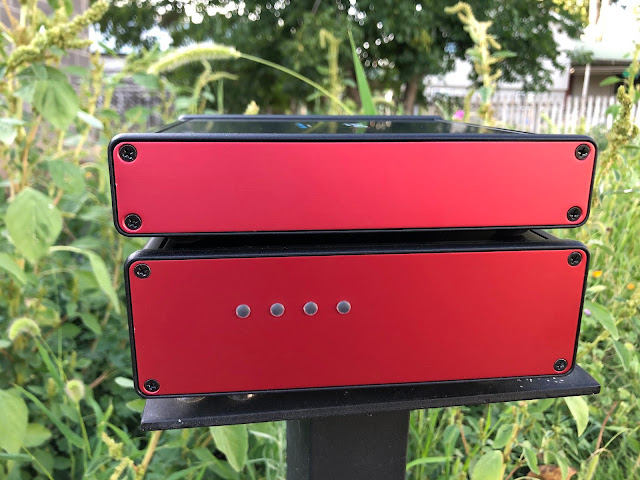 Link to Specifications
Fourteen years ago when I started reviewing gear the digital analog convertor (DAC) was a rare piece of gear. Few models existed and for most audiophiles, fanatics, and hobbyists it was technology to watch rather than pursue. Fourteen years later and DAC’s are an indispensable part of our hobby. The quality and capability have risen dramatically, while the price/performance has dropped even more so. The ability of DAC’s to pull out details in music that would go otherwise hidden is what keeps us chasing the musical dragon.
This piece of equipment begins with the digital audio converter chip. Manufacturers have a handful of different chips to choose from based upon various goals. In the case of Tommy O'Brien's Digital Amplifier Company, the chunk of silicon is the PCM1794A (one for each channel). If you know anything about O’Brian, it’s that his electrical engineering background lasers his focus to eliminating noise wherever possible. It starts with making sure the signal path stays as short as possible. Output from each PCM chip is fed into a Double Differential Output Filter. This design is right in line with his amplifiers. Anyone who has spent time with one of his Cherry Amps knows how true this is, as his amps are black ghost quiet.
Ironically enough, O'Brien's first DAC prototype came out sounding “tubey” by his own admission even with 120db S/N ratio. Instead of dismissing the design, he recognized that audiophiles do like the sound, and like any savvy business person, he sells that model, the Dac Dac 1 TL. At the same time, knowing that improvements can be had from further noise elimination via output circuits three other models are available: The 1 HS, 2 HS (review model), and the 2 HSV which has digital volume attenuation. The 2 HS can be used to drive amplifiers directly as long as the source has a volume control.
For this review, O’Brian sent the DAC DAC 2 HS ($1290) along with the USB to SPDIF coax converter box ($390). A few have dismissed the cases as DIY, but the finish quality is too high as the metal edges are smooth, screws are properly recessed, and the anodized red face is actually quite attractive, though the artistic side of me misses the deep Ferrari red paint of his Maraschino amps. While the Digital Amplifier Company is a small shop, the packing is absolutely A+. Both pieces are shipped double boxed with several inches of foam padding.
The main unit of the DAC DAC 2 HS is about as simple as it gets. The front panel has just four horizontal green LED lights: Power, Valid Signal, >50kHz, >100kHz. Once the cord from the external power supply is plugged in, the 2 HS stays on. A nice touch is the Sorbothane feet for additional isolation.
The back panel consists of a female power socket for an external power supply, SPDIF, finally left and right XLR output jacks. To his credit, O’Brian does supply quality Neutrik XLR to RCA converter plugs. The USB to SPDIF box does not require a power supply, works with up to 384/32 signals, and is completely isolated electronically. But it does mean that for most current digital music users that one’s total investment rises to $1580. I would imagine at some point in a version 2 design the USB input will be included in a single box. 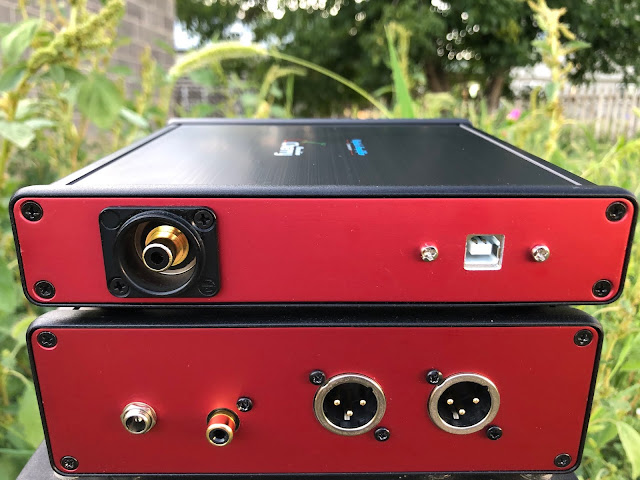 Listening Time
Since the DAC DAC 2 HS requires a preamp the review model was plugged into a Parasound P6 (review upcoming) for the vast majority of the time. This also allowed for comparison against the P6’s onboard Dac as well as my reference Simaudio 230 HAD. Amplification was split between the Peachtree amp500 (class D), Parasound A23 (solid-state), and a Vista Audio i34 (tube). Speaker complement involved Magnepan .7’s, Totem Model 1, and Paradigm Prestige F75. Source delivery is an iMac using both Tidal streaming and Amarra.
This summer Mark Knopfler has been in heavy rotation, therefore I started by dialing up “The Man’s Too Strong” from Brothers In Arms. Just like O'Brien's Maraschino Amplifier, the Dac Dac 2 HS noise level is ink black, thus allowing for the maximum punch of the strumming power cords to be felt in equal balance to the soft passages flanking either side of the string explosion. Another critical impression that the 2 HS resolves is room effect on Knopfler’s vocals. By shedding more noise the distinction of the recording space comes into focus in balance with the slight nasal quality of the vocals. This is especially noticeable in the title track, even with the long notes of the electric organ.
Shifting to U2’s anthem “I Still Haven’t Found What I’m Looking For”, the clean guitar notes open the track pop with intense color against the black background. The ability to hear the various instrument layering in its most musical beauty. Throughout the various tracks compared to the Parasound P6’s respectable onboard unit was akin to the inside of a windshield before and after cleaning. The difference is that blatantly obvious. The driving bass line in the group’s “With Or Without You” can sound rather sloppy without a decent Dac. The 2 HS reveals it to be a series of tight, controlled jabs. Additionally, the late song tight quiet passage before the lead guitar solo comes in is lean in time. It’s moments like that in music that make this audiophile smile. Hearing each instrument’s unique sound while simultaneously enjoying the blended melody is where it’s at for the listener.
Switching to acoustic works, Xuefei Yang’s Sketches of China reveals the ability of the 2 HS to pull out nuances in percussion instruments, as well as the tight plucks of top notes of the guitar. This is my favorite Tidal discovery of 2020 and a great way to reveal the strengths and weaknesses of equipment. The Spanish-inspired acoustic guitar songs easily define muddy vs. clear reproduction. It also forces gear to prove whether it has warmth. In this case, confirming there is no dryness in the 2 HS performance, tonal naturalness is abundant, which begs the question of how much more of tubey sweetness does the Dac Dac 1TL provides?
When it comes to poor digitized recordings due to loudness wars, no artist has suffered more than Adele, though Billy Joel’s library from Columbia Records suffers from the “crunch”. The underrated “Turning Tables” is a loudness war victim. I’ve had the good fortune to hear what the incredible DCS Vivaldi does to make the recording special, as well as the Benchmark Dac 3HDR. The 2 HS 130db signal to noise also makes the track listenable above 80db. Therefore, don’t be afraid to enjoy marginal recordings with this dac, it’s going to bring out the musicality.
Diving into Hi-Rez David Chesky recordings the 2 HS quickly recognized and switched to the proper bit rate. The DAC DAC 2 supports all rates from 32kHz to 192kHz, including 176kHz. However, the DAC DAC 1 TL and HS don’t support the 176kHz sample rate. Since Chesky records at higher rates what one hears are no sleight-of-hand, it’s the real deal. The 2 HS resolves the female opera vocals and bassoon in “Sonnet No. 5” from his Espana recording with delicious results. 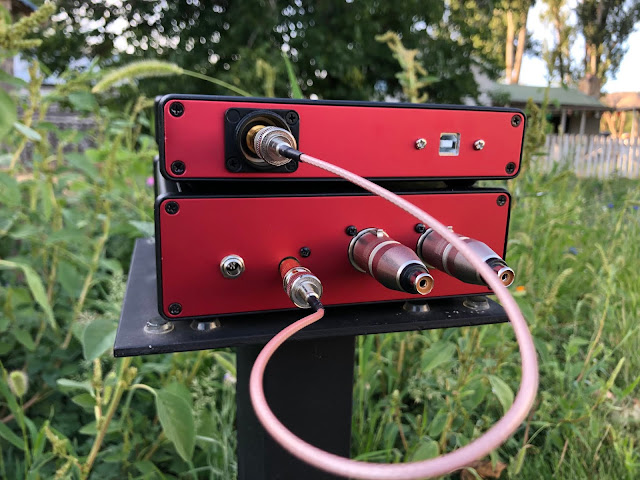 Comparing the Dac 2 HS to the Simaudio 230HAD is limited to the sonic output as the Simaudio is also a headphone amp, includes volume control, and has an additional analog input. The 2 HS bests the 230HAD with a 15db improvement in S/N ratio. Therefore the blacks are blacker, explaining the slightly softer presentation by the Simaudio. I did not miss the 230HAD at all while reviewing the 2 HS, though I’m not a fan of the green LED’s, silly as that sounds.
Final Thoughts
Being the son of a small business owner, I appreciate the value and intense dedication that a small business brings to the market. Tommy O'Brien's principle of following the rules of proven engineering and laws of electrical engineering get under the skin of pure audio subjectivists, but there is no argument that his products are well built, have a loyal following, and are nearly impossible to find on the used market. The DAC DAC 2 HS may not be flashy, but its performance is equal to any in its price range. Not only are the basics done right, but just as important, every bit of sonic quality is wrung out. Like all Digital Amplifier Company products, all DAC DAC’s are sold Internet-direct, and demo 2 HS units are available for an in-home tryout. Give Tommy O'Brien's DAC DAC 2 HS a spin, I’m betting you’ll be enamored like me!
Mark Marcantonio