Speakers have a character. They can be precise, enveloping, dynamic, punchy, demanding, and sparkly, just to name a few. I admit, I’ve owned or reviewed seemingly every type described, and then some. Each has their charms and musical genres where they shine. For 90% of owners the key is owning the one set of speakers that best meets their overall personal taste. Thankfully, the last ten years have brought speaker performance up a full level across all price points making the reward all the better.

In September, the LSA-10 Signatures arrived on my doorstep. Now LSA has been around for a while, but now under the banner of Underwood HiFi and its Internet-direct sales model. The LSA brand is expanding into electronics, yet it’s heritage and DNA is sound and that means speakers. The LSA-10 Signature is a stand-mount, tear-drop design that honestly is larger in person than in photos. The shape means that the widest point of the cabinet is not the front baffle at 8 inches, but actually a third of the way back at 9.5 inches. Thus giving the LSA-10 Signature a very stocky profile with the 13.5 height, and 14.5 depth are factored in. The review pair came in a beautiful satin Rosewood finish that includes the ultra-smooth veneer that is a hallmark of Chinese-made cabinets.

The LSA-10 Signature driver complement consists of a 1 inch silk dome tweeter, and a 6.5 inch aluminum driver. Both use XBL2 magnetic structure. Instead of a typical rear port, LSA instead uses a flat oval passive bass radiator. I’ve been a fan of bass radiators since owning a pair of Polk Monitor 10’s decades ago. The LSA-10 Signature usage continues my thumbs up enthusiasm. A Linkwitz-Riley, fourth-order crossover and a single set of five-way binding posts complete the easy-to-drive, 8 Ohm nominal design. 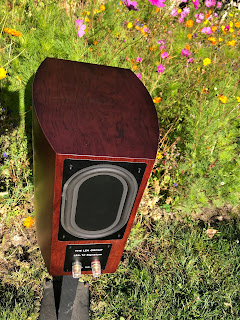 Placement of the LSA-10 Signature is a bit different. Be aware that the passive radiator does change the equation. So practice a bit of patience and the bottom-end reward will make the time spent worthwhile. On my 24 inch, sand-filled Celestion si stands in my 10x11 room, this meant a placement 31 inches out from the wall, and just 19 inches with toe-in from the sides. Metal, magnetically attached grills are provided, but being so used to grill-free cone speakers, they stayed in the box.

Previously, Underwood HiFi was selling the various LSA speakers in an optional package deal with the Peachtree nova300. Having the Peachtree amp500 on hand, I started my listening with that pairing, adding the Simaudio 230HAD headamp/DAC as a preamplifier and streaming from an iMac via Tidal. There’s a reason why Wally Liederman picked the combination as the mellow, silk dome tweeter is given a bit of a boost by the classD amplification. To make sure I wasn’t imagining things I played Donald Fagan’s very good, but hot-sounding Kamiriad album. Normally, I avoid playing this selection with classD, especially with my Paradigm and Totem speakers, as it is just too bright. Not so with the LSA-10 Signature/Peachtree combination. The track “On the Dunes”, the mix of cymbals and piano opening is airy and fresh. Listening through the tracks, Fagan’s New York nasal twang sounded more like the Steely Dan Pretzel Logic days from the mid-1970’s. 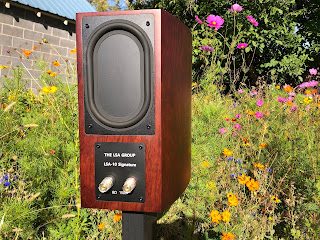 Continuing the search, Pink Martini’s album Hey Eugene is a cornucopia of instruments and rhythms. The french horns in the title track stay colorful when presented by the LSA-10 Signature. No hint of the shrillness that this brass instrument can fall into with so many speakers. Listening to “Tempo Perdido”, the female vocals are stunning in tonal beauty. The punchy latin bass lines show off the value of the passive radiators. The harp is brought out from the shadows and given a distinct place on the soundstage.

Digging deeper into the album, the fullness of the LSA-10 Signature soundstage is illuminated in the song “Mar Desconosido”, the percussion is placed far on the left side. The strings are front and center. The horns rise up from behind the strings, much like a live symphony. The skippy “Taya Tan” with its chanting vocal opening, followed the tight, distortion-free electric guitar prances. Once again the passive radiator provides a fine, detailed bass. The LSA-10 Signature may be relaxed, but it does not disguise recording flaws, including the vocal distortions in “City of Night” some 90 seconds in. Call it honest pleasantness.

Swapping out to a Parasound A23 or a classic Adcom GFA-555ii, the solid state amplification shades ever so slightly the top frequencies of the LSA-10 Signature along with a touch of warm mid-bass. Listening to Deustch Gramaphone’s Holst: The Planets, the LSA-10 Signatures avoid many of the limitations of typical stand-mount speakers with symphonic music. The larger cabinet in combination with the passive radiator provides a sense of gravitas that my first generation Totem Acoustic Model 1’s just can’t match. The movement “Mars” with the buildup to the distinctive pounding march shows the LSA-10 Signatures at their very best, a stand-mount that plays like a small tower. In the movement “Venus”, the delicacy of the woodwinds and violins are beautifully recreated without having to turn the volume up to be heard, or just as importantly providing the energy to fully deliver the music.

Over the three months I had the LSA-10 Signatures on hand Keith Jarrett’s piano compositions received ample play via Tidal with all three amplification types (classD, solid state, and tube). Each imbued their best characteristics that the speakers distinctly defined. Depending on your taste, the LSA-10 Signatures will provide the magic you want, whether it be the golden warmth of tubes, the intensity of chord strikes with solid state, or the clarity of classD. Therefore, don’t worry about not having the proper amplification type, the LSA-10 Signatures will be just fine replicating what arguably is the hardest single instrument to recreate.

A little over a year ago, a scientific study concluded that Tracy Chapman’s “Fast Car” was the tonally most pleasing popular song to humans. Toto’s “Africa” was also mentioned. I put Bonnie Raitt’s classic “Nick of Time” in that group. The LSA-10 Signatures provided that midrange magic and silky smoothness that truly defines this speaker. In “Love Letter”, the beat is kept tight and punchy, allowing the funky keyboard to take center stage. All the while the vocals carry clearly in their own space. The hidden gem on this album “Cry on my Shoulder”, perfectly blends organ, piano, bass drum, and light hi-hat, while the mid song guitar riff punches to the front of the stage with the LSA-10 Signatures making it so easy.

Lately, Lucinda Williams has been in regular rotation. In many ways she is the real life version of being “almost famous” to the mainstream. Maybe that’s what makes her catalog so good. The LSA-10 Signatures do Williams a great justice. For example, “Learning How To Live” finds the balance of her sharp, but aging vocal tonality. In “Fancy Funeral” the slight echo is noticeable, showing the recording space. The LSA-10 Signatures reveal the scratching of the bass guitar. One limitation of the speakers is that vertical dispersion is just ok, though the non-sweet spot horizontal dispersion is impressive. 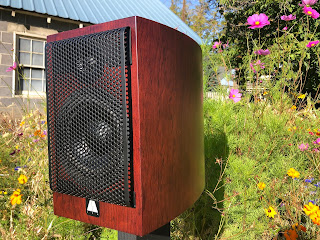 A week before the end of the review period, I brought the LSA-10 Signatures upstairs and hooked them up to my simple HT system. I kept the subwoofer off, and let the speakers demonstrate their movie chops. As expected, the LSA-10 Signatures provided a near full throttle experience, missing only the deepest of bass frequencies. The bass provided was plenty for underrated Gene Hackman/Will Smith thriller “Enemy of the State”. Voices and placement was very good. Explosions and chase scenes didn’t muddy the combination of action and music. Therefore, those of you who require double duty of your system, the LSA-10 Signatures will definitely not disappoint, and don’t be surprised if you forget to turn on the subwoofer.

The LSA-10 Signature speakers are much like that sweater and jeans you look forward to wearing, as they are relaxed and all-day comfortable. They don’t demand your attention, nor put you to sleep. In some ways they remind me of the effect that Harbeth’s have in that you forget how much musical detail you are hearing because they are so pleasant. I truly wish I was in the market for a pair stand mounts, as the search would be over as through December the speakers drop from $1499 to $1399. The LSA-10 Signatures are easy to drive, position, sinfully good, and one insanely hell of a bargain!