Let’s face it, early adoption of new technology is fraught with risk. For every reward, there are penalties that can sink the concept, if not the business. It’s not the path for the weak of heart. It sometimes requires an almost obsessive desire to be successful. History is littered with good ideas that never panned out. Yet, sometimes the only way forward is to surf that new wave.

About six years ago, the team at Peachtree Audio became aware of a new design path for digital amplification. However, a great deal of research was needed, therefore an eye was kept on the potential future while the nova line went into development/production. Fast-forward four years and the concept was now a reality; very low negative feedback-based class D design. The great amplifier designs of John Curl, Charlie Hansen, and Nelson Pass have preached for decades the importance of low, if not zero negative feedback had reached class D.

In order for low negative feedback designs to work, MOSFET needed to be replaced by Gallium Nitride (GaNFET), which turns on four times faster, and off at double the speed of MOSFET design. I could try and explain, but instead I highly recommend watching John Darko’s exceptional YouTube video explanation of the GaN400. It needs mentioning that with a GaNFET design parts quality in the power supply is absolutely critical as Peachtree’s Jim Spainhour explained. Unregulated, as well as average quality units fell short. The GaN400 design team set about and developed a truly matching power supply.

While reviewing the company’s impressive amp500, I was chatting with Spainhour and asked if they had any matching preamps coming out soon. In vague terms, Jim informed me that a new line is in final development that involved advanced amplifier design. With COVID delays the new equipment of the PreDac and GaN400 finally arrived in October 2021. Wisely, Peachtree stuck with its recognized oval real wood cabinet design with the review unit in a brownish ash veneer that is similar to the currently popular wood flooring finish (Ebony Mocha and Piano Black are available).

One of the things I’ve always appreciated about Peachtree is the clean simplicity of their design. Beginning with the power button set lower along the left side than the row of input buttons. The LED lights for the inputs are visible, yet small enough not to distract. Like it’s integrated siblings the LED’s double as volume indicators when adjusting the volume both by the large knob or the remote control. The headphone jack occupies the lower right. The phono shares this input. To listen to vinyl, just connect your table to the AUX-2/PHONO input button for ten seconds to engage the internal phono preamp. Every button, including power, operates with a soft tactile touch with a barely audible click. The distance between each is plenty even for those with sausages for fingers or suffer from tremors. 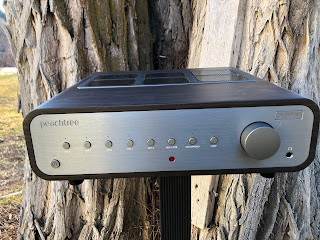 Internally, the $2,499 PreDac is similar to the nova500 integrated, beginning with the ESS Sabre 9000 Series Pro DAC. This chip is actually four DAC’s per channel. The full capabilities of the DAC input include 120db S/N ratio and decoding of bit rates up to 384KHz PCM and 2.8224-5.644 MHz DSD. Since my digital source is an iMac, I only used the USB-B input without a hiccup. As mentioned above, the moving magnet phono section shares an input button with AUX2.

When comparing the internal DAC with an off-board Simaudio 230HAD, the PreDac doesn’t match the resolution of the Simaudio, but the fact that I wasn’t craving switching from the PreDac compared to the built-in DAC of Parasound P6 that I reviewed several months back shows what a positive job the Peachtree engineering team did incorporating the ESS Sabre 9000 chip. 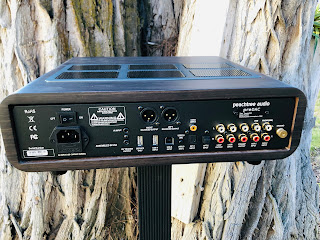 The gray plastic remote with a metal top plate may not be beefy, however it passes the ergonomic test easily. The buttons are broken up into sections and different shapes, making it easy to navigate by touch once memorized. Special tip of the cap for the volume increase with each press of the button is an easy, rather than intense increase in decibels.

With the Peachtree standard 14”width, 13.5”depth, 4.37 height, the GaN400 leaves plenty of space for other gear. In my case, a 40 year old solid oak rack handmade by my grandfather. It’s just nice not having to worry about review equipment fitting. Connection between the PreDac and GaN400 was via XLR cables. Since the Paradigm Prestige F75’s were in rotation that was the first pairing with the PreDac/GaN400.

From the first track of Donald Fagan’s hot Kamirakand album it was obvious there was a difference from the Peachtree amp500. Fagan’s nasal intonations were a notch richer, though the sparkly nature of the Paradigms was still obvious. The GaNFET design was showing its character. Over several weeks of playing the album the auditory experience was consistent. A comfortable energy was at work. Piano strikes have an intensive, natural clarity. Trumpets and trombones punch and carry the room. 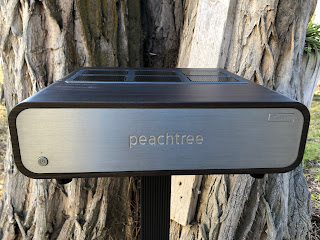 Not that the power difference of the 400wpc of the $2,990 GaN400 vs 500 wpc of the amp500 was noticeable. While the amp500 had a bit more perceptible grunt thrust when absolutely needed, I never felt slighted listening to my Magnepan .7’s with the GaN400. There was always plenty of torque to play even the most difficult passages. From Tchaikofski’s 1812 Overture to Gustov Holtz’s “Jupiter” from The Planets, the GaN400 lit up the .7’s in a way that only truly high power/current amps can provide with hard-to-drive speakers. Unlike the beastly Adcom GFA-555ii that I enjoy for it’s vintage solid state power, the GaN400 is clearer, cleaner, and more revealing.

With this review taking place during the Christmas season, a great deal of holiday music was played through the Peachtree combo. Whether it be from the easy listening stable of Windham Hill artists in their annual Winter Solstice recordings, or the fun of A Dave Brubeck Christmas, the PreDac/GaN400 combo created a comfortable listening experience. There’s a melodic naturalness to the presentation that captures the spirit of the musicians as well as the magic of the season.

No mention of holiday music is complete without Vince Guaraldi’s brilliant A Charlie Brown Christmas. While this album is my favorite with tube amplification paired with my Totem Model 1 speakers, the GaN400 really does present a new level of warm richness from a class D amplification design. The magical composition “Skating” listened to through this amplifier/speaker combo is akin to drinking eggnog with spiced rum. It was a repeatedly delicious feast in my listening room. 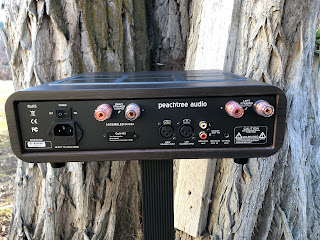 With vocals, the PreDac/GaN400 combo found the texture that truly gifted singers possess and that most any audience recognizes. Not surprising, Adele 30 has been in heavy rotation in my system since its release. While the sheer power of her vocals is obvious, the maturity and deepening richness is solidly fleshed out with the PreDac/GaN400. Tracks “Oh My God” and “I Drink Wine” reveal both Adele’s increased texture as well hints of her British accent that previously didn’t cause notice with the amp500 as well as other power sources. With the ongoing influence of computer-assisted vocals masking individual characteristics, it’s a breath of fresh air to hear real human subtleties. With a bundle price of $4,498, Peachtree is creating some serious sub-five thousand temptation.

Having reviewed a handful of Peachtree audio gear over the years, an absolute truth is that the organization as a whole does not rest on its laurels. With each new piece of gear there is an obvious step up in quality and execution. With final assembly done in the United States, Peachtree is a part of a growing community that proves the idea that reasonably-priced equipment can be built outside of China. 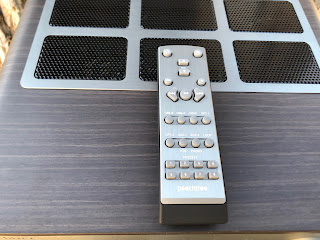 The PreDac whole-heartily earns the mantra complex simplicity, for doing so much with absolute ease of use. The GaN400 is the show-stopper, taking class D amplifier design onto a new path. The best comparison to the MOSFET design of their amp500 comes from the automobile world. Think of the amp500 as the latest Chevrolet Corvette. Its akin to an American power and ride muscle car. The GaN400 is a BMW Z4, all the power but with a refined ride. Do yourself a favor if your in the market for separates as Peachtree Audio’s PreDac and GaN400 amplifier are a first-rate way to take a musical journey.