What is it about good surprises happening in small packages? In my case, the high school years of the latter 1970’s with the mini-Aiwa stack intrigued me to no end. But that design seemed to fade as quickly as the heat built up in that four-piece grouping of tuner, preamp, amp, and cassette. While headphones seem to rule the desktop sector, there are a few exceptions. One such entry is the $399 Vista Audio Spark, a simplified integrated amplifier, designed and constructed in Serbia.

To call the Spark understated, is about as accurate as any word in Webster’s dictionary. Its dimensions of 5.3”w X 2.6”h X 11d, makes it similar to a brick. Its substantial weight of 5.5lbs confirms it’s no lightweight. Fit and finish of the black casing with a clear glass face and simple LED lighting further state that the Spark deserves attention. With a narrow face the design team kept the volume knob proportional and used a small vertically mounted toggle switches for the two input choices, as well as the power switch. Though I do wish the font was a bit larger and thicker. When powered on, the Spark name is backlit in blue.

The rear panel is equally simple and logical, with speaker posts on each end rather than next to each other, a power cord receptacle, and the two source inputs. Internally, kudos to the design team for putting in the effort to use an onboard toroidal transformer, instead of an external power brick. Under the hood, (though a bit difficult to open since extra small allen-style screws are needed) reveals that solid electrical design was used in the layout. Solder points are clean and capacitors, etc. are perfectly aligned with proper spacing, though if the right channel fuse ever needs replacing, thin fingers will be needed.

The Spark is rated at 20 wpc into 8 or 4 Ohm loads. Obviously, pairing the Spark with my Magnepan .7’s wasn’t going to be a reasonable match. Since it was time for a speaker rotation change, I pulled forward a pair of Paradigm Prestige 75F mini-towers. Nominally rated 91db @ 8 Ohms, the 75F’s made for a solid pairing. The Spark’s cheat-free design makes its 20wpc of power an honest number, much like the 1970’s receivers with similar output. When a little extra current is needed, the Spark provided the needed energy.

To confirm the assumption, a collection of Dire Straits tunes were selected via Qobuz. Sometimes lost in Mark Knopfler’s skilled guitar work are the consistent bass notes that kick in after the opening guitar riff. “Down to the Waterline” is a perfect example. The Spark had no problem delivering enough grunt to push a comfortable amount of low end out of the speakers into the room.

As the various tracks played, the Spark repeatedly demonstrated an unstrained flow of musicality. The bass line stayed honest, Knopfler’s vocals stayed true, never dissolving into harshness. His accent, which is actually quite light while singing, adds a slight warmth to most compositions and is picked up by the Spark. This passing thru, rather than embellishment, says much about the quality of components under the amplifier’s hood. 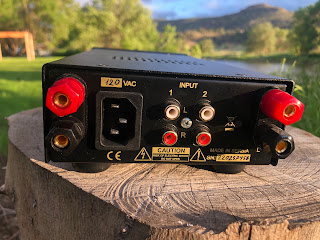 The Spark’s top-end avoids the harshness with equal ability. Cymbals and upper keys of a piano are smooth, and avoid the tinny sound that happens when I’ve played recent models of big box a/v receivers with the same Paradigm speakers. Alison Krause’s treble vocals are an excellent test of any amplifier or speaker as the purity of her voice exceeds virtually any other contemporary artist. At the same time, the limits of the recording space are revealed. Adele’s 25 reveals such limitations anytime she steps on her vocal gas pedal. The Spark doesn’t cover up, instead the amp does it’s job by relaying an honest account of the music.

As so many audio critics, including myself regularly mention, the midrange is where the magic lives in songs. The Spark, by using quality parts in a clean design, really shines. Going back to the Dire Straits well of music, “Where Do You Think You're Going” recreates Knopfler’s guitar with a natural ease and richness not usually found at this price point, all with just a hint of warmth. Just another reminder of receivers of yore, without the darkness that sometimes came between some brands wood side panels.

The xylophone and acoustic guitar (played in a Spanish-style) in “Private Investigations” is a terrific tour of rock music’s midrange at its best. The Spark keeps the layering of instruments clean much like seeing the different strata of rock/soil in canyon cutaways. It’s a sign that the engineering work behind a worthy signal to noise ratio is solid. While this black level won’t match the top current design work of John Curl or Nelson Pass, the Spark deserves recognition for an honorable effort at a sub-$400 price point.

Maybe the biggest surprise is the sheer depth of notes that the Spark reproduces. Usually in the price point most sonics come out thin-sounding, much like a cheap t-shirt at a tourist trap shop. The Spark presents a full experience, something once again I attribute to quality components. The topography of the board isn’t complex, it’s simplistic quality based on time-tested design. Having a built-in torridal transformer (mounted in the front interestingly enough), is a definite step-up from an off-board brick. In the end, it’s all about top notch design and execution.

What happens when iit comes time to crank up the volume? Nothing bad as my ears gave up well before distortion set in. Trying jazz, orchestral, rock, EDM, or country, the Spark never surrendered. At the end of the review, I took the Spark and speakers down to my 60x30 garage shop with an 18ft ceiling peak. The Spark held its own, continuing to pump out clean music at volumes far exceeding happy neighbor levels.

Like every quality budget component I’ve ever reviewed, if one looks hard enough a compromise or two can be found. I will say that the volume knob did demonstrate a bit of looseness. The distance the “axel” travels is several inches, thus the wobble becomes exaggerated and created sound when hitting the hole. A rubber gasket on the inside of the front panel most likely would solve the issue. Beyond that, I found nothing to disappoint.

Small audio manufacturers, both domestic and foreign, deserve far more attention than they get. While the giants dominate the paper press publication world, worthy gear is flying under the radar. Over the years, I have found that the biggest surprises have come from little guys. I shouldn’t be surprised, as my father was an independent business owner that beat the big retailers by providing outstanding service, and flat out-working the competition.

Boris Sasic of Vista Audio has once again tapped into his knowledge of central European audio design and quality, and brought to the USA a truly fine example of solid state, small profile audio engineering. The Spark is a knockout performer worthy of anyone looking for a desktop office, or bedroom integrated amplifier. The review Spark is so good that it's staying. Enough said!