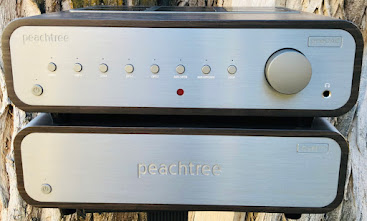 Last January, I posted my review of the PreDac and GaN400. Respectfully, Peachtree was kind enough to allow me a full year experience with both pieces. I’m not going to rehash the review. Instead, I want to focus on the long-term physical performance of the two pieces.

The PreDac never gave a hint of a hiccup. The volume control stayed absolutely smooth and silent. Never a pop or a click, scratching, or catching. The input selection buttons have remained flush and even, always responding immediately to my fingered choices. I mention this specifically as where I live, deep in the semi-arid canyonlands of the Pacific Northwest, dust is a daily experience. While I’m fastidious about keeping my equipment clean, over time dust does like to get inside mechanisms and cause minor irritations, followed later by mechanical trouble.

As for performance, the phono section of the PreDac is a nice match with my album or two a week habit. Plenty of clarity and separation with my vintage Technics linear tracking table with a Stanton cartridge. The various digital inputs have all received workouts, though to be fair USB hoarded the vast majority of the work over the past year. Special recognition to the volume adjustment from the remote control; the volume step increase/decrease was well within reason. The DAC performance stayed absolutely true, no dropouts or bit-rate switching. Consistency is the name of the game with preamps, and the PreDac was an absolute “never worry” component. The best compliment I can give is that it disappeared and let the music hold my attention.

Not to be forgotten, the PreDac remote control received plenty of use as well. The buttons work just as smoothly with no repressing in order to make proper sensor contact with its internal board. While it may be lightweight, based on usage, it held up much like a more substantial unit.

The GaN400 engineering is equally impressive. No matter how hard I pushed the amp with power-hungry Magnepan speakers playing demanding tracks, the GaN400 never felt close to overly warm. The RCA & XLR inputs remained tight and firmly anchored. The same holds true for the speaker binding posts and power receptacle.

As mentioned originally, the GaN400 with its Gallium Nitride (GaNFET) design kept its solid-state-like sound over the 12 months. Those who have spent a great deal of time with class D amplifiers, know that they can be a bit intense-sounding with upper frequencies. I still have yet to find a recording that irritated my auditory senses with the GaN400.

As the months went by after the original review came out, I did find on a handful of recordings where the GaN400 didn’t deliver the absolute robustness of the amp500. This always happened when driving the Magnepan .7’s. It’s important to note that according to the specifications, the GaN400’s output power doesn’t change from 400 wpc between 8 and 4 Ohm speaker loads. The other number that may explain the difference is the Damping Factor is just >245 vs. >650 on the amp500. I want to be clear, Magnepans are not the norm when it comes to power needs. Other speakers that I listened to (LSA, Totem, and Paradigm) all showed plenty of the GaN400 power and torque with the same music.

Once again, the absolute engaging sonic detail and comfortable sound makes the GaN400 thoroughly enjoyable across all musical genres, to the point where it became the main amp in my system. A Parasound A23 and vintage Adcom GFA-555ii stayed off all summer and autumn. To put it succinctly, the GaN400 is addictively engaging and pleasant.

In any lengthy conversation with audiophiles or enthusiasts, we’ll admit to idiosyncrasies with equipment. From which order to start up equipment, to needle drop tricks. With the Peachtree PreDac and GaN400, the only thing I found that is no different than solid-state and tube amplification was to give the amplifier about fifteen minutes to warm up before firing up music. Considering how little power the GaN uses, it’s not an economic or environmental concern.

My original wrap up on the Peachtree PreDac and GaN400 is even more valid a year later. The combo is truly a worthy performer, with rock-solid build quality, a neutral sound, and finally a first-rate value.